It seems we now live in “an age when people make money from the arts and culture.” Until recently, the arts and culture had been the classic money-losing activities, but it’s said that they have been transformed into a sort of money-making Aladdin’s lamp.
As an example, people have always been advised to preserve cultural assets with utmost care and tamper with them as little as possible. Recently, however, the policy regarding these assets has undergone a major shift, and we’re told that they should be not simply preserved, but profited from financially as resources for tourism. We hear that museums and other facilities are encouraged to sell off the treasures in their collections and generate sources of funding for management and purchase of needed artworks, instead of lamenting their budget deficits. Tangible cultural properties are regarded as tourist attractions, and artworks are viewed as products to be traded at high prices—and expectations are rising for intangible cultural properties as well. In addition, contemporary art projects and art festivals that authorities and corporations have previously kept at arm’s length are now expanding their scope nationwide, and attention is being paid even to spin-off benefits. 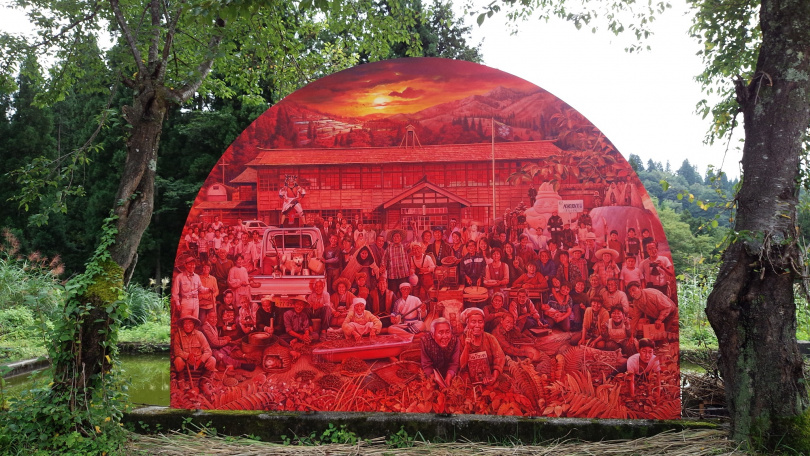 In short, there is no doubt that the arts and culture are indispensable to the economy. Sustainable economic development cannot be expected if the arts and culture are ignored. Economist Nobuko Kawashima, Doshisha University professor and advocate of the Creative Economy, says, “In today’s world, the economy does not support culture; culture supports the economy.”
In this way the arts and culture serve a useful economic role; however, important economic benefits cannot be realized if the arts are judged only in terms of economic value, or if art projects that are deemed economically valuable are the only ones to receive funding. In fact, there’s a paradoxical relationship between the arts and economics: the artistic and cultural activities that ultimately bring about economic benefits are actually the ones that are far removed from economic activities and therefore considered to be of little economic value. In terms of the “sacred-profane” dichotomy, art has generally been regarded as “sacred”; in addition to being “sacred,” however, it’s essentially been something “profane” that is deeply rooted in people’s lives. Consequently, the greatest value of the arts has been in the fact that they make people’s daily lives interesting and fulfilling, and diversify and enrich the existence of each individual and the relationship between nature and society. In other words, what’s important has been exchange and inclusion rather than division and exclusion. Moreover, art has been enjoyed with a perception of differences and intermixing among people as a source of creation. That is, the arts have their own intrinsic value that is not the same as usefulness. And because they have intrinsic value, they offer clues to creative solutions and diverse innovation in relation to social issues. What’s most important for the arts is creation, but creation is a process of trial and error through repeated hypothesis and experimentation; and just as scientific and technological research cannot develop into productive applied research if the basic research is lacking, basic research-style creation through repeated experimentation and risk is essential in the arts and culture.
Even in the arts there is a tendency to support projects that easily gain everyone’s understanding and sympathy and can be of immediate use, because these projects produce an immediate economic ripple effect. In the corporate world, moreover, companies endeavor to support artistic and cultural projects in areas close to their own field. However, as a result of continued investment in contemporary art projects praised for being different, such as the Echigo-Tsumari Art Triennale and the Setouchi Triennale, local governments and supporting companies have also gained the invaluable return of brand strength, a source of economic strength. This is certainly because brand strength is something gained through difference. Cost effectiveness in the arts and culture is the result of this mechanism.

From 1990 to 2013, at Asahi Breweries Kato was in charge of wide-ranging social contribution programs centering on cultural activities. He was involved in the inauguration of the Asahi Art Festival and the Asahi Beer Oyamazaki Villa Museum. He formerly served as advisor for the Asahi Group Arts Foundation.
As head of the Association for Corporate Support of the Arts’ research department, he is active in making cultural policy recommendations, for example assembling the Association’s “New Compact” proposal. He served as the Association’s executive director from 2012. He is engaged in environmental development for not-for-profit organizations from a business perspective, and together with related bodies nationwide he started up the Arts NPO Forum. He has also acted as arts support/networking organization Arts NPO Link’s director, and as director for ARDA (Art Resources Development Association).
From 2004 to 2010 as managing director for Yokohama Arts Foundation, he took on the promotion of Yokohama’s Creative City of Culture and Art initiative.
Currently his principal posts include advisor to the National Federation of UNESCO Associations in Japan, director of the Chishima Foundation for Creative Osaka, trustee of the Saitama Arts Foundation, Chief Operating Director of the Advanced Program for Arts and Culture Shizuoka, and advisor to the Ministry of Internal Affairs and Communications Plan to Create Vibrant Regions. Kato received the 2008 Art Encouragement Prize from the Minister of Education, Culture, Sports, Science and Technology. He recently published the book “Gijutubunka no toushikoka: Kigyo mesena to sozo keizai [Impact of investment in the Arts and Culture—Corporate Patronage and the Creative Economy]” (Suiyosha Publishing), which considers the subject of this column, the investment impact of the arts and culture.