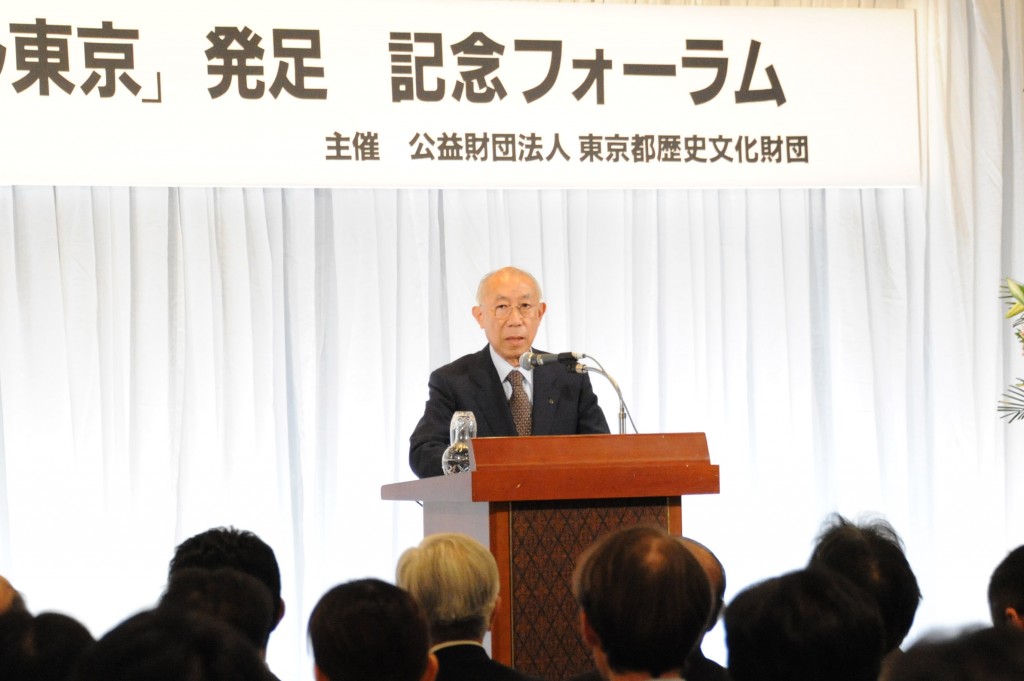 As chairman of the Tokyo Council for the Arts, I have for some years been involved in discussions and proposals regarding the creation and launch of the Arts Council Tokyo, and I would now like to outline the background behind establishment of the Arts Council.

In December 2007, the Tokyo Metropolitan Government established the Tokyo Council for the Arts, and in 2010 the Council released a proposal to “impart creative vitality to Japan through culture and the arts,” aimed at promoting cooperation between the national and metropolitan governments on arts- and culture-related policymaking. First of all, this proposal advocated a reconfiguration of national policy to give culture a more central role in growth strategies, and called for investment in culture to reinvigorate the nation. The proposal also emphasized the cultivation of fresh human resources and encouragement of private-sector support for culture and the arts. It called for the breakdown of vertical policy barriers between national and regional governments, and the development of mechanisms for cooperation between the public and private sectors, in pursuit of a common goal.

In-depth discussions by the Tokyo Council for the Arts on what this “development of mechanisms” meant in specific terms led to the announcement, at a task force meeting on cultural policy held October 27, 2011, of the establishment of the Arts Council Tokyo.

While I am the head of a private-sector corporation, my examinations of the role of business in society have led me to the conclusion that private enterprise must be revolutionized so as to give culture a more central role.

Until the end of the 20th century, corporations placed undue emphasis on the generation of short-term profits. To use a colorful analogy, corporations were like monsters that fed on society and grew ever more gargantuan, destroying the environment and depriving people of their humanity in the process. I came to suspect that this stemmed from the core principles of present-day capitalism, by which the flow of capital consists solely of the exchange of money for goods and services. Perhaps, I thought, society could be improved if corporations made culture a basic building block of their business strategies. I started to advocate “cultural capital management,” in which culture is seen as a valuable, renewable and expandable resource, and becomes the fourth key ingredient in a business management recipe that previously included only people, goods, and money.

I came to believe it was possible, through a process of trial and error, to generate “absolute value” by employing culture to maximize the potential of individuals, and by incorporating cultural diversity to reinvigorate organizations. I was convinced that in an era when many organizations and individuals are locked in a battle for “relative value,” it was possible to establish this “absolute value” and achieve sustainable growth. I renewed my awareness of the role of organizations in society, and the importance of culture, in the course of pondering how corporations can transform the way they are organized and do business. However, this train of thought took me beyond the role of corporations and to the issue of broader social transfiguration, as I grew to believe that culture-based innovation could also be applied to nonprofit organizations and regional government policy.

While I was considering these matters, I naturally thought of Arts Council England, the national development agency for the arts in that country. In many ways, though, England’s system would not necessarily work if applied in Japan. For one thing, funding and administration of the Arts Council England is fully independent, but in Japan this would be hard to achieve. However, I believe the handling of culture by an apolitical organization at arm’s length from public finance and administration is exactly what Japan needs in terms of cultural policy.

Throughout history, Japanese culture has primarily been created and presented by people in the private sphere, with the occasional exception of patronage by some daimyo during the Edo Period. It is not easily subjected to national or political control. With this in mind, my colleagues and I have considered how, in the current social and political environment, an organization could be formed that acts independently and stays at a comfortable distance from public finance and administration. We decided that the greatest impact would come from a cultural organization like this in Tokyo, Japan’s capital and the world’s largest mega-city. These considerations led us to establish the Arts Council Tokyo, which maintains considerable independence while also advising the Tokyo governor and helping to shape the cultural life of the capital.

The cultural vitality of mega-cities such as London, Paris, New York, and Tokyo in some ways embodies the cultural life of the entire nation. Their scale, and potential to reach audiences, are in a different category altogether from those of cities with populations of 300,000 or so. Viewed as a single unbroken conglomeration of densely populated urban areas, Tokyo is the world’s largest mega-city. Vibrant cultural activity unfolds simultaneously in many areas and venues throughout the city. Here, it is possible to see a world-class symphony orchestra perform practically every night of the week. Japan’s music world is concentrated here in terms of both quantity and quality, and practically every day there is a concert that would happen only once in several years in one of our provincial cities. At any given time, masterpieces of world painting are on view at multiple museums throughout the metropolis. However, Tokyo’s potential for cultural leverage is diffused and information on cultural opportunities tends to be drowned out in the greater hubbub of our information society, and it is questionable whether the arts are creating a more confident public, a more vibrant society, and a larger mark on the global map for Japan. I believe the problem lies in the management of our cultural resources. Is it not possible for us to support our cultural industries, while at the same time expediting a cycle of presenting new cultural directions, assembling and editing creative works so as to make an impact on individuals and society, and drawing on the reactions (even when they include controversy and objections) as a source of new cultural innovation? I believe that to do so, we must come up with an entirely new organizational paradigm.

To make this endeavor bear fruit, we must hold cultural producers and museum curators to higher standards in terms of organizing and public relations, and we must cultivate producers and directors in Tokyo who have the ability to raise the international profile of art and culture from Japan. Also, I believe we must think of the production of culture in terms of generating absolute value, creating culture with universal appeal that garners acclaim not only in Japan but overseas as well.

The mega-city of Tokyo already has more than enough cultural potential, but realigning its elements and turning the city into a cultural powerhouse with all-around appeal requires not only creativity on the part of individual organizers, but also an apparatus for integrating and disseminating original cultural creations without being swayed by financial or political trends.

The reasoning I have just outlined underlay the Tokyo Council for the Art’s call for establishment of the Arts Council Tokyo. The goal is to make Tokyo the world’s great megacity not only in terms of size, but also in terms of the quality and originality of its unique culture, as befits a city of Tokyo’s international standing. If this is achieved, the ripples generated in Tokyo will extend to every part of Japan, contributing to the growth of dynamic local communities brimming with creativity, and culture originating in Tokyo will find an ever-wider audience overseas. Naturally, this goal will not be achieved in a day. As the Arts Council Tokyo goes into action, I wish to express a word of caution: we must remember it takes time for individual wellsprings of talent and vision to flow together and erupt into a geyser of creativity. And we must seek out and cultivate new artistic possibilities that may at first seem irrelevant, or have not yet gained public understanding, in a manner that the national government and private-sector sponsors are unable to do.

Though Japanese people are little aware of it, I believe Japanese culture has already gained considerable global recognition. At the same time, a great number of Japan’s cultural assets remain untapped. Many such assets are taken for granted and as the decades go by, ripen from innovations into traditions. Japan’s people should be confident in the knowledge that our creativity enhances the lives and enriches the spirit of people worldwide. What is the identity of Japan, which differs from those of the U.S., France, England? Moving forward, we must reexamine Japan’s identity and unique style, shift from a domestic to an international paradigm, and generate a universally acknowledged, integrated image of Japan without sacrificing our existing identity.

It is common knowledge that today our world is no longer shaped by economic power alone. What we need now is cultural power, underpinned by historical understanding and human wisdom. I look forward to seeing a society transfigured by the arts and culture, with the launch of the Arts Council Tokyo standing as a major milestone on the journey.