For this year‘s International Artist Invitation Program, we will be hosting an exhibit entitled “Reminding Future : Metal Silence 2019″ will be held on Fridays, weekends, and public holidays from Friday, October 18 to Sunday, November 17, 2019, at the Former Hakubutsukan-Dobutsuen Station, a building in Ueno with historical value that received acclaim at last year’s exhibition.
International artists invited to this year‘s event are two Spanish artists, Cristina Lucas and Fernando Sánchez Castillo. Cristina Lucas will exhibit “Unending Lightning”, three-screen video installation masterpiece exceeding six hours showing an aerial map, tracing the citizens of the world victimized by bombings from the advent of air strikes to the present, based on the tragedy of Guernica in Spain. The history of the venue and the message of the piece come together in this exhibit. Fernando Sánchez Castillo will exhibit “Tutor”, a new piece featuring a bronze tree that “survives even though it is about to break”, associated with the wide variety of trees in Ueno Park.
From how “steel weapons lead to death” touched on in “Unending Lightning” by Cristina Lucas, who reconstructs human history from the perspective of the voiceless, and from the wordless plant in “Tutor” whose silence is expressed in bronze, comes the title of this year’s exhibit, “Metal Silence”, which also represents the duality of metal.

Cristina Lucas was born in Jaén, 1973. She studied at Complutense University of Madrid and the University of California Irvine, then was a resident at Rijksakademie and at ISCP, New York. She currently resides in Madrid. Using multimedia such as photography, video, installation, drawing, and performance, her work explores the possibility for different readings of history and offers better explanations of the present.
One piece focuses on the relationship between religion and art, with her as the artist speaking to three ministers, with light social satire interwoven into video showing how, even though the preachers are ignored by passers-by during Times Square rush hour, they continue to talk about the power and importance of art. With performances of her smashing a replica of Michelangelo’s Moses statue with a hammer, urging viewers to uncover the secret to their own creation, and video of the goddess in Delacroix’s “Liberty Leading the People” played by a half-naked young woman that ends tragically with her being beaten by the men, she raises the issue of gender discrimination in history and art history. “You Can Walk, Too” (2006), shown at the “Astonishing Reality” exhibit at the Museum of Contemporary Art, Tokyo in 2014, is a comical video of a village dog walking around town on its hind legs, which incorporates irony of women who force themselves to behave like men and toward men themselves. Lucas’s thrilling and critical works have received wide acclaim and are featured at exhibits worldwide.
Lucas received international acclaim for “Pantone-500 + 2007”, a two-dimensional world map tracing changes from the 5th century BC to the present, on collection at the Pompidou Centre in Paris. Her exhibit at Ueno Cultural Park Hakubutsukan-Dobutsuen Station is also based on a map, showing the grand history of the human race that encompasses politics, social structure, and state power.

The exhibition piece was created through five years of research, using big data and the help of experts all over the world. “Manifesta 12” hosted in Palermo, Italy last year was extoled as the pinnacle of the year in British The Guardian, and the video installation exhibited here has received high acclaim. The bombing of Guernica by German troops with whom General Franco was complicit with during the Spanish Civil War, which resulted in the deaths of many citizens, is famous in Picasso’s work as well. Lucas’s work, spanning six hours and three screens to trace all of the victims of air strikes worldwide since the advent of air strike from1911 to the present, is her life’s work.
The left screen shows how many citizens were victims of air strikes and where, while the center shows close-ups of maps of the region and displays dots to show the scale of the bombing, and the right screen is composed of photographs of the event. For the exhibit in Japan, even more accurate data on Japan on the number of victims across Japan during World War II, including during the Tokyo Air Raids and the atomic bombings of Hiroshima and Nagasaki, will be reflected in her work through cooperation with Masahiko Yamabe, Senior Researcher at the Research Office for War Damage in the Institute of Politics and Economy of the Center of the Tokyo Raids and War Damage in Koto Ward.

Fernando Sánchez Castillo was born in Madrid in 1970, he currently resides in Madrid. He studied fine arts at Complutense University of Madrid, philosophy at Autonomous University of Madrid, and also studied at the École nationale supérieure des Beaux-Arts in Paris. After a residency at Rijksakadamie. He is part of Research Team of United Nations Geneve, PIMPA (Memory , Politics and Art Practices). Spending his childhood under the Franco regime, Castillo has a keen interest in social and historical events, analyzing factors related to authority and representation and reviewing historical discourse from different angles, and expressing this through sculpture, painting, and video.
“Architecture for Horses” (2002), in which a gentleman in a suit atop a white horse gracefully strutting about the university building, was part of the Astonishingly Real exhibit at the Museum of Contemporary Art in Tokyo and even became the poster for the event, and shows how his university was designed under the Franco regime for riot squads to be able to enter on horseback to quell student demonstrations. “Pegasus Dance” (2007), in which water cannon trucks normally used to break up demonstrators perform a magnificent dance while spouting water, has also been shown at the museum as part of a group exhibition. A precision robot made for handling hazardous materials draws an abstract painting, like the marvelous images created in Marcel Duchamp’s “Ready Made”, expand playfully and artistically on machines and devices needed only in serious social situations to bring about a change in values and to expand the realm of art. He is working on the “Minor Hero” series, creating figures of a young man standing before tanks at Tiananmen Square in China using a 3D printer, another piece themed on revolution and resistance to oppression. Monuments, records, public places, and traditions serve as tools for revealing the recent past. Scrutinizing the relationship between art and authority calls to memory historical groups and examines the structure of powers and symbols that still dominate society. 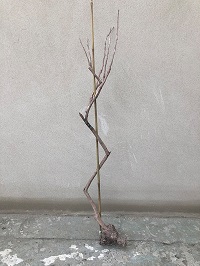 Ueno Park is a treasure trove of diverse trees.”Tutor”, a new piece inspired by this Ueno forest, is zig-zag sculpture of thin bronze branches that seem like they might break. Even planted trees growing into big trees could wither and die from illness or pests. For example, in the history of Ueno Park, the Lawson cypress and evergreen magnolia planted in 1879 by the US General Grant and his wife are famous, and remain planted to this day at the Grant Monument near the entrance to the zoo. However, the Lawson cypress planted by the general has started withering and is currently undergoing treatment.
This new piece by Castillo expresses that trees, whose lifespans are longer than humans, are also affected by social and environmental change, and, like humans, have various ways of living, and asks what is health and what is normal, suggesting a tolerant and inclusive society.

Around the UENO PARK with Music 2020