Search
LANGUAGE
SNS
2010-2011 Programs for the Tokyo Culture Creation Project, which marks the third year of the project, was announced at the Foreign Correspondents’ Club of Japan (Chiyoda City) on June 4.

The project has three core objectives. The first is “Festival” which hosts contemporary and high quality international art festivals as well as cultural events in various fields. The second is “Kids” which intends to help children’s development through arts and culture. The third is “Artpoint” which aims to cultural focal points of culture in various communities of Tokyo. Representing these three objectives, Mr. Roberto Gabbiani, a chorus master at the Teatro Regio di Torino (Turin Royal Theatre), Mr. Man Nomura, a Noh actor (holder of an Important Intangible Cultural Property) and the chairperson of the Japan Council of Performers’ Organizations, and Mr. Tadashi Kawamata an artist and professor at the Ecole Nationale Superieure des Beaux-arts made speeches about their aspirations for the programs.

For details of new programs and the programs continued from the last year in the Tokyo Culture Creation Project, please refer to the information materials distributed at the press conference listed below. 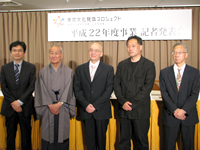 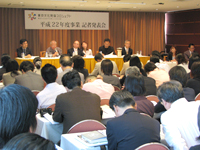